The real stories behind the best neighbourhoods of Valencia

A quick Google search into the best neighbourhoods of Valencia will soon lead you to the most popular areas of the city: Russafa, El Carme and El Cabanyal. Not coincidentally, these are also the neighbourhoods that struggle the most with gentrification processes ánd are home to most Airbnb apartments in the whole city. These neighbourhoods are described as hip and trendy but what is the real story behind them?

Russafa
In Russafa it might seem you are in a super local neighbourhood and to some extent, this is true. It is just not the same local neighbourhood as it was before. It has now turned into an area that is most famous for its nightlife and home to many hip coffee cafes, modern galleries, vintage clothing shops, and endless trendy looking bars and restaurants. The places are Instagramable and so is the food.

And that is exactly what makes Russafa so attractive to visitors (both tourists ánd local people from Valencia). But only ten years ago, the atmosphere was completely different and the rapid changes have consequences to the residents of the neighbourhood. Because of the gentrification process that is happening, many people that used to live in Russafa now cannot afford it anymore and are forced to move elsewhere. Not only because the neighbourhood has become a popular place to live in, but also because many investors recognized the appeal of Russafa for tourists, and thus started buying up apartments to rent out on Airbnb. As a consequence, housing prices are going up even more and more people are forced to move out of the neighbourhood to make room for touristic apartments.

On top of that, while young people enjoy the countless bars and clubs that are present in Russafa, residents of the neighbourhood have trouble sleeping because of all the noise this is causing. Neighbourhood groups have been urging the government to take steps in both areas by implementing clear regulations for Airbnb and by using a night curfew for clubs and terraces that are located in residential streets, but up until now with little effect. Banners to make you aware of this are widespread in Russafa.

El Carme
This is probably the most popular and most famous neighbourhood in Valencia. Hidden between some central highlights like the Cathedral of Santa Maria and Lonja de la Seda (the old silk exchange), its narrow streets and colorful buildings speak to the imagination of many. This neighbourhood is famed for being vibrant and lively, but at the same time, local residents have banners hanging from their windows saying local people are facing extinction in El Carme.

The story is somewhat similar to that of Russafa. Here there are also issues with Airbnb and nightlife. But in this case, many people left the neighbourhood already due to poor housing quality and because it is an area that is largely inaccessible to cars. Because there are fewer residents and more and more tourists, local grocery shops, bakeries, and hairdressers are being replaced by quirky bars and nice gift shops. Facilities other people from Valencia use as well (this area is popular for its nightlife with many locals too), but it does not necessarily serve the needs of the few people still living in El Carme 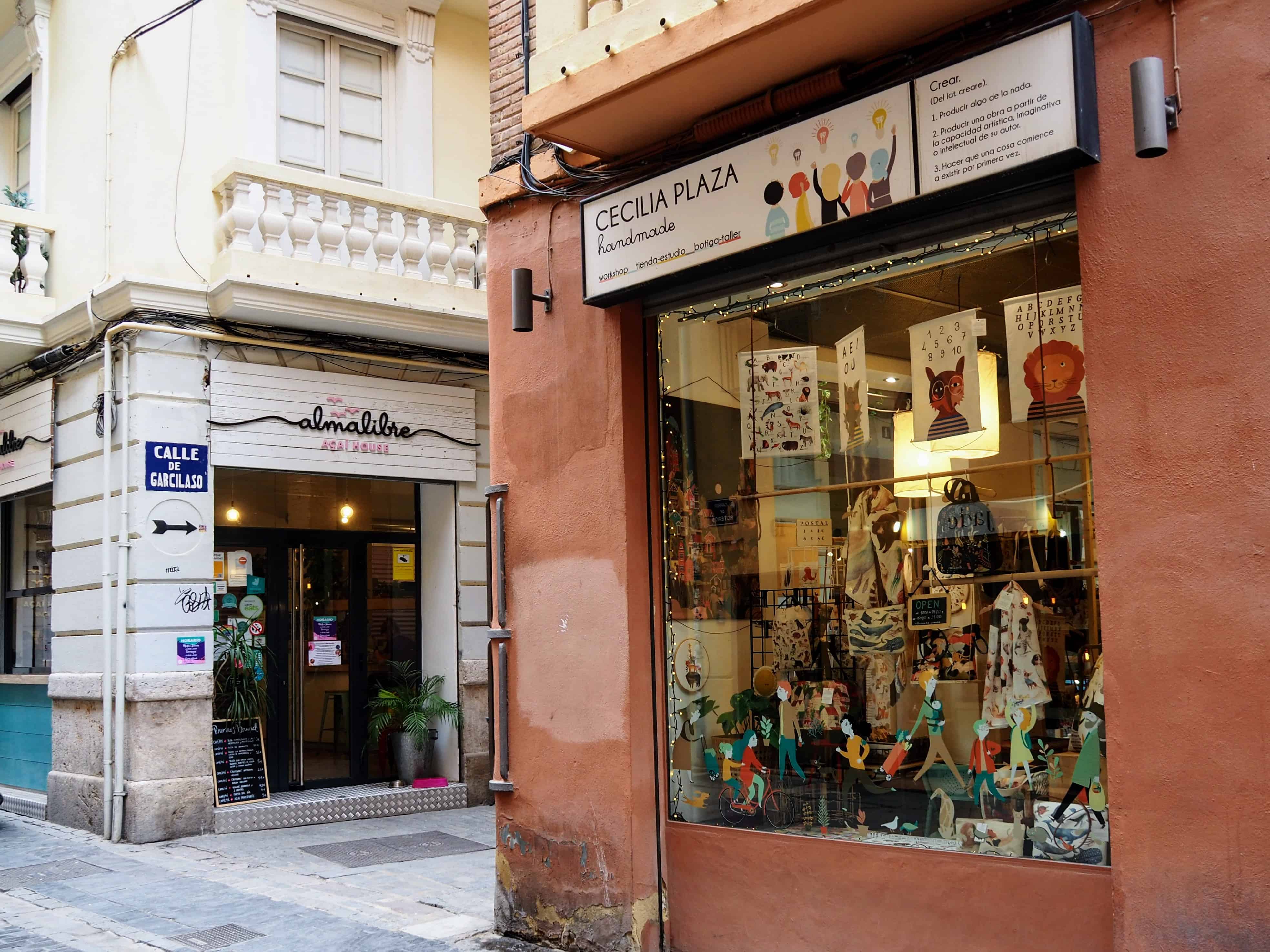 The more popular part of El Carme: gift shops and cafesMoreover, many of the vacant apartments are now being transformed into Airbnb’s. This makes the area even less pleasant for locals to live in as it changes the neighbourhood structure even more. With the absence of local residents and the facilities that they use, this neighbourhood mostly seems to come alive at night while during the day in some parts it can feel as if the whole area was abandoned. Without government intervention the neighbours claim, the area is prone to becoming a purely touristic area with all residents moving, leaving nothing but tourist apartments to take their places.

El Cabanyal
About El Cabanyal they say it will become the next Russafa: hip and trendy. Even though it might be getting there, El Cabanyal is definitely not there yet. For years there were plans to bulldoze the picturesque houses of this old fisherman’s neighbourhood, to make way for the big Avenida Blasco Ibañez, a large street connecting the old city center with the beach. During the preparatory process of this project, most people living in El Cabanyal were evicted from their homes and many houses are currently abandoned. Because of this, some parts of the neighborhood feel more like a ghost town than the next must-visit neighbourhood. But, while bulldozing plans are off the table with the new government, new regeneration plans have already started. Old warehouses are now being converted into cultural spaces and public money is used to renovate houses and streets.

Without these renovations, the neighbourhood would surely deteriorate so the regeneration seems like a good plan. However, most of the people that had to leave in the past will not be able to return as the investments are also leading to gentrification processes making El Cabanyal unaffordable to them. At the same time, here as well, many apartments are being converted into Airbnb’s. At this moment, this neighbourhood is not really touristic yet (apart from the areas that are close to the beach), but with the developments currently going on, El Cabanyal has all the ingredients to become the next hotspot of the city. What is happening in El Cabanyal currently has little to do with the impact of tourism, but is mostly because of the gentrification process going on. At the same time, this process will eventually make the area more attractive to tourists as well. This is precisely what some of the remaining neighbours are accusing the local government of.  According to them, investments are not done for current residents, but only to make the area more attractive to investors and tourism.  It does not protect them from being evicted from the neighbourhood when prices go up, and this is something that should be a primary concern.

Know the real story and act accordingly
Usually, there is more to a neighbourhood than just being hip. There is always a process behind it that has certain consequences for those who live in the area. To me, it is important to be aware of that story before promoting some place as the best neighbourhood of a city, without knowing the darker sides of it. It seems that the words often used to describe these neighbourhoods have another meaning behind them. When we read ‘hip(ster) neighbourhood’, this often means extreme cases of gentrification are behind it. When it says, ‘from no-go area to hotspot’, it often signals displacement of people with lower incomes.

Much of this is not directly or only linked to tourism, but there are still some things you can do as a responsible traveller. This mostly comes down to learning about the neighbourhood culture and its history to be aware of the whole story. Respect local life that you just learned about and behave accordingly. In addition, do not stay in an Airbnb apartment (unless it is someone’s home) as it often leads to intensified gentrification processes and does not help to protect local life.

More impressions? Check out my highlight ‘Valencia’ on Instagram for a detailed photo and video report of the developments in the different neighbourhoods! (and some insights in my PhD research life in the city)