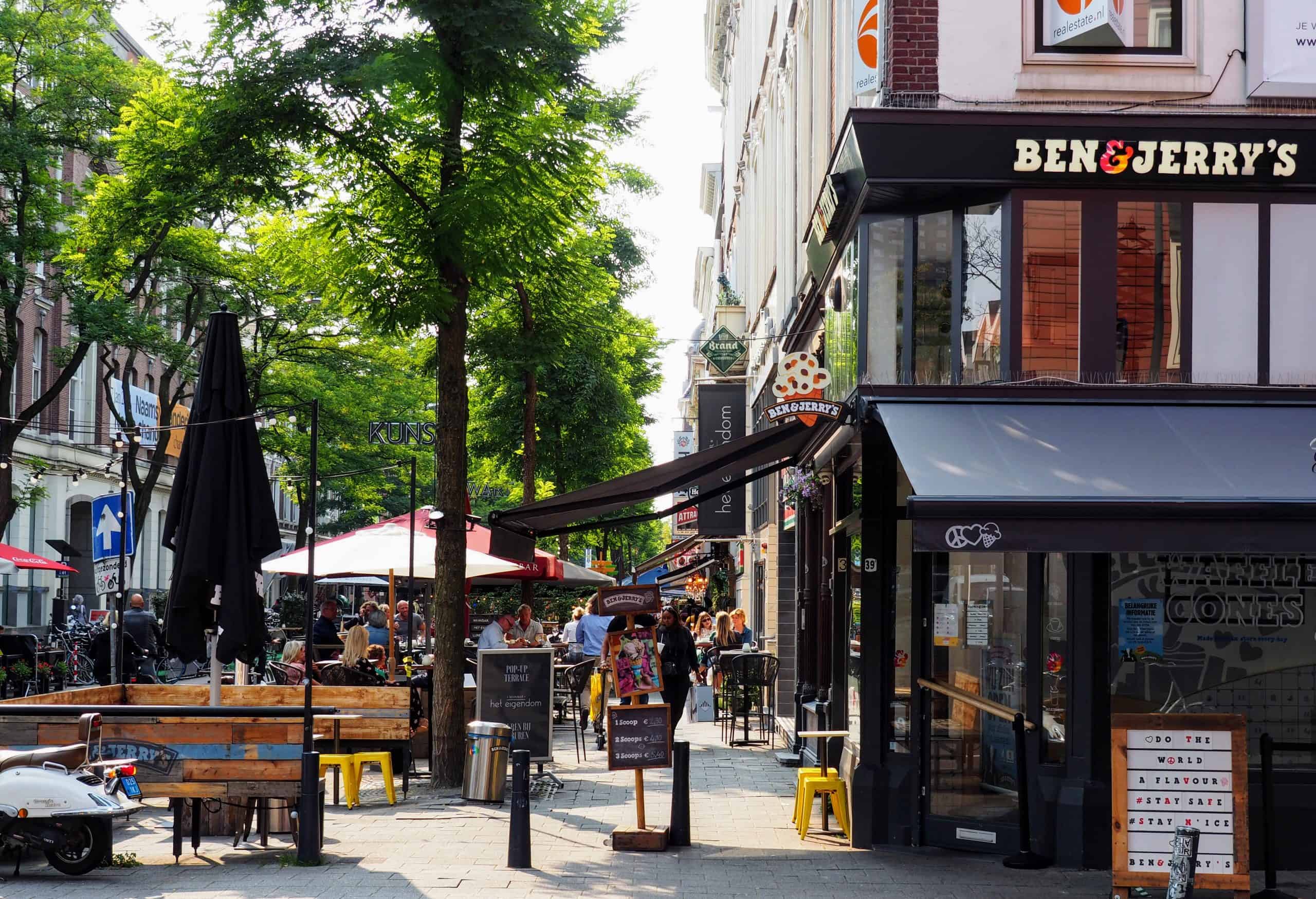 Many cities want to develop sustainable tourism using creative strategies. One way to do this is by attracting tourists that explore the city beyond its most touristic places, for example by visiting more local and creative areas. This blog post based on the research paper ‘The consequences of being ‘the Capital of Cool’. Creative entrepreneurs and the sustainable development of creative tourism in the urban context of Rotterdam’ investigates if these strategies can truly lead to more sustainable forms of tourism.

Creative strategies for sustainable tourism
The aim of such strategies is to prevent touristification and overtourism in the city. This means that residential facilities (like supermarkets) and housing are not replaced with souvenirs shops and tourist accommodation, while at the same time making sure there are not too many tourists in one place. One way cities try to achieve this is by attracting tourists that explore the city beyond its famous hotspots and instead explore local and creative areas. Combined with a growing interest of some tourists to visit authentic and off-the-beaten-track areas, in practice, this has resulted in the development and promotion of artsy districts or creative local neighbourhoods. As local creative entrepreneurs (for example artists with a local shop or a gallery owner) are part of this environment,  they would add to the local economy and make the area nice and attractive for locals. Simultaneously, this would attract tourists which the entrepreneurs would benefit from financially. As tourism is not the core business of the entrepreneurs,  it would not change the city’s culture and therefore be more sustainable.

Sounds great right? Well, yes, but there are a few questions we need to ask ourselves before we can decide if this strategy truly leads to more sustainable tourism. For example, how much do tourists explore such creative areas? And what are the consequences of such strategies? The research paper that was published in Journal of Sustainable Tourism, studies this phenomenon in the context of Rotterdam, the Netherlands. By talking to 22 local creative entrepreneurs in Rotterdam, the Netherlands, it unravels their role in the development of such creative neighbourhoods and the connection with tourism. It also deals with the question of who is to benefit from all this. Let’s break it down and start with some background on Rotterdam becoming ‘the Capital of Cool’.

Rotterdam becoming the ‘ Capital of Cool’
In the past twenty years, Rotterdam invested heavily to shake off its grimy image by using culture and creativity. This goes back to the beginning of the 1990’s when both the Museumpark was developed, and Witte de With area was transformed into a cultural axis, connected to the Museumpark. Around 2008 the government started regenerating ‘promising’ neighbourhoods to attract young, middle class and creative people. With this, a deliberate gentrification process was started in which the creative entrepreneurs I spoke to often were central.

‘(…) they really wanted that we, young graduates, would stay in the city, in a neighbourhood, or come to this neighbourhood. In that respect we were then the perfect target group, you know, because Rotterdam also really wanted to bind this group to the city’. – Interview respondent

At the same time, a strategy was launched to create a more hospitable city centre. The development of architectural icons formed a big part of this strategy and subsequently, building De Rotterdam, renewed Central Station, and the Markthal were developed. All this was accompanied by favorable criticism from (international) media and in 2015 Rotterdam even made it to Lonely Planet’s must-visit list for 2016. The city had finally obtained its long wanted status as ‘The Capital of Cool’ (CNN, 2015). International tourism started to grow rapidly. Overnight stays grew with 17.4% after Lonely Planet’s announcement.

However, concerns about this are growing as well. What was traditionally a poor city has in recent years experienced a growing gap between richer and less affluent people. A growing group of people cannot afford to live in the city anymore due to increasing housing and rental prices. At the same time, people worry about the increase in tourism numbers and the effect this will have on the city (will it become like Amsterdam?). In March 2020, a new vision on tourism in Rotterdam was presented. In this vision there is, amonst other things, attention for attracting a type of tourist that is interested in visiting unexplored areas. Even though the interviews for this research paper were held before this vision was published, it can still can provide us with insights the relation between tourism and local, creative neighbourhhoods.  This article explores what the potential consequences could be of targeting this type of tourist and if it could lead to more sustainable tourism. In order to do so, there are three questions that need to be addressed which are discussed below.

How much do tourists actually explore?
Previous research has shown that the majority of tourists coming to the city has this exploring character and they look for unique and creative places.  However, the research I conducted showed that the creative entrepreneurs loacted in the off-the-beaten-track areas did not feel like tourists were visiting those areas that often. Therefore local entrepreneurs do not benefit as much as could be expected.

‘I think it’s very interesting, because it’s also contradictory somehow that, okay, they are coming for alternatives, but the people that profit the most, that’s still the more mainstream tourist product’. – Interview respondent

Especially areas that were created with more government intervention (for example Oude Noorden) seemed to be less attractive to tourists compared to those areas that developed in a more bottom-up manner (for example Het Schieblock, and Het Industriegebouw). One thing that became clear, is that it is not a given that tourists automatically will venture out to local neighbourhoods. At the same time, it became clear that the majority of the creative entrepreneurs focus on local people first, tourism is considered a nice bonus. They could therefore be part of a sustainable tourism strategy because it does not lead to touristification of the city (e.g. only souvenir shops).

What are the consequences of tourism in creative neighbourhoods?Local neighbourhoods that are most interesting to visit for tourists all have one thing in common: they are gentrifying. This is something I also encountered in Rotterdam. The neighbourhoods that have been regenerated are precisely the ones that are most often recommended as a place to visit for tourists. Creative entrepreneurs recognize their role in this process by making certain areas of the city more attractive with their businesses for both locals and tourists. At the same time, they recognized some of the negative consequences of this (for example rising housing prices due to popularity), but also the replacement of local creative businesses in the long run.

Witte de With is an example of this. It is centrally located and originally an alternative and creative area with a long history of gentrification. By now it has become one of the more famous touristic hotspots in the city. Here and in other centrally located areas, we see that international companies like Starbucks, Ben & Jerry’s, and Happy Italy’s start to pop-up and replace local businesses. Not everybody is happy with this as they believe those companies do not add much to the local economy or creative atmosphere of the city.

‘And I sometimes think to myself, you know, we’re all clapping our hands when another Happy Italy opens, or a Starbucks. We all think it’s great. But at the same time, those are not the chains that contribute to the economy, to the city, you know. They don’t have added value I believe.’ – Interview respondent

It has to be noted, that those companies locating in the city is not a direct effect of tourism only. Those companies come to the city because it becomes more popular in general. And tourism is part of that. But at the same time, locals use these facilities as well. This shows that we can hardly separate the impact of tourism and ‘regular’ gentrification but rather that both are heavily intertwined. The presence of tourists has the potential to further stimulate gentrification processes and we can question if that is desired.

Who benefits from this type of tourism?
When talking about widespread gentrification on the city level, a similar process happens. Likewise, this is not caused by tourism directly either. However, it is partially the result of a city that has successfully reinvented its own image from the ugliest city in the Netherlands to Capital of Cool. This made the city more attractive to both Dutch people as well as international visitors. Many people I spoke with for my research emphasized the fact that these developments might not be for everyone though.

‘Now, in the city centre, it’s almost solely entertainment. And you’re on the street with a glass of wine and [being] cool. And yes, if you look closely (…) you get a specific audience, yes, white and highly educated. And yes, we’re all part of that.’ – Interview respondent

Many entrepreneurs pointed out that the urban development strategies mostly target creative and higher educated people to come to the city. Therefore, they feel that many locals do not feel included or benefit from these developments. The hip and creative initiatives appeal only to this specific group of locals and tourists. Local entrepreneurs that do not fit in this group are not likely to benefit (even if tourists would explore more).

‘The popularity of Rotterdam has also been a bit over the top, you know, so this hipster capital story, there’s always this story that I tell about this division as well. This hip Rotterdam that has become popular, but there’s always a big part of the people living in Rotterdam that doesn’t benefit at all from that.’ – Interview respondent

Moreover, the inequality that was already present in Rotterdam seems to be growing even bigger. This leaves us to question who benefits from these creative urban development strategies and the related type of tourism.

Sustainable tourism is inclusive tourism
For tourism to be more responsible is seems that urban development needs to be more responsible. This means that existing urban issues such as inequality and gentrification need to be considered and addressed within a tourism strategy. This can be done by taking the following ‘takeaways’ into account.

In summary, it means that both urban development as well as tourism should be more inclusive to the diversity of residents in a city. This way more people can feel at home in the city, and more people can benefit from the urban (tourism) development strategies.

Want to know more? Check out the full article published in Journal of Sustainbale Tourism here.

PrevPreviousWe’re all in it together: sustainable tourism post covid-19
NextBe a responsible traveller and do not visit… AmsterdamNext